A Dedicated Family of Restaurateurs

The Giambancos have been creating delicious Italian and American cuisine for almost 40 years. 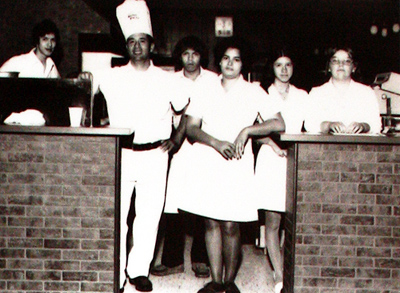 Who would have thought a random stop in a local parking lot would lead to the birth of a Tappahannock legacy. Almost 35 years ago, Filippo Giambanco and his eldest son, Anthony, were driving from Brooklyn, NY to Petersburg and stopped in Tappahannock to rest. The two were on the way to visit Giambanco’s brother, who owned a restaurant there. The pair were in a quest to find a suitable location to open their own Italian restaurant. Late one night, while taking a rest stop in what is now Tappahannock Towne Center parking lot, Giambanco eyed a “for rent” sign and decided to give the number a call the following day. After several phone calls and meetings with the owners in the following weeks, and some heavy negotiations on Giambanco’s behalf, a Tappahannock tradition was soon born.

Elena and Filippo Giambanco moved their sons, Anthony and Johnny, and daughter, Anna, to Tappahannock. A family tradition was born, along with the first Italian restaurant in the Tappahannock area, Roma’s Ristorante. The family opened their doors in 1976 with a small menu. They served pizza, in various sizes and toppings, submarine sandwiches and basic Italian dishes, such as spaghetti and lasagna to the locals.

In the beginning, Mamma Giambanco made her favorite traditional Italian homemade sauces and Papa Giambanco helped out with the cooking. Meanwhile, Anthony made pizzas and also helped out with the preparations. Anna waited on customers and ran the cash register. It was a complete family run business in which the parents and children learned the ins and outs of running a successful restaurant. The main focus was to always serve the best Italian cuisine available, in order to keep the customer happy and coming back.

As the children grew up, they married and branched out. They too yearned to own their own Italian restaurants. Today, Anthony and his family own and operate Roma Ristorante on Staples Mill Road in Richmond. Anna and her family own and operate two Roma Ristorante’s, one on Nine Mile Road in Richmond and another which recently opened on Williamsburg Road in Sandston. The youngest Giambanco sibling, Johnny, owns the original Roma’s in Tappahannock. His parents still help him there. The family also became involved in the community from the beginning. They wanted to give back to the community that was supporting them. Johnny is a staunch supporter of all children in the community and often donates to local ball teams, fundraisers and children’s organizations. The Giambanco’s have given graciously to their new hometown neighbors in numerous ways over the last few decades. The entire family has hearts of gold.

As Johnny grew up in the family business and handled more and more of the day to day operations, he wanted to expand the menu and include more specialized options. He would travel to New York and try different Italian dishes. He would then return home and create his own version in the kitchen at Roma’s. The menu grew from two pages to the now nine pages.

Specialty items abound at Roma’s. There is something for everyone incorporated into the menu of over 250 items. Mama Giambanco’s special spaghetti sauce recipe is still used today and the pizza dough is still made fresh from scratch daily with the finest ingredients. The addition of a full daily salad bar has been a huge success and has all the ingredients to make the perfect salad to compliment your meal.

While perusing the menu, you will find the finest in Italian specialties. You will also see dishes bearing the names of Johnny’s family, including children, Ariana and Gianluca, as well as locals that have been dining at Roma Ristorante for decades. The Giambanco’s very first customers are now sharing family meals with their grandchildren at Roma’s, carrying on the family tradition of fine dining with the Giambanco family.

Menu options are some of the most diverse in the area. There is a treasure trove of delicious dishes to be found each time you eat at Roma’s. One will find over 20 gourmet pizzas in addition to your regular favorites, plus soups, salads, sandwiches and delicious submarines with every ingredient imaginable. Roma Ristorante has a delicious mixture of steak and seafood too. Selections include items such as Alaskan snow crab legs, crab cakes, steamed shrimp, bacon wrapped scallops, prime rib, t-bone and Delmonico steaks, just to name a few. A large variety of chicken, eggplant and veal dishes are also included in the well built menu. Johnny Giambanco has prepared his selections and fine-tuned his menu over the years to adapt to customers requests.

When it comes to various pasta dishes, Roma Ristorante may be copied, but never duplicated. There is ravioli, tortellini, spaghetti, and everything in between that you could ever ask for. The sauces (meat, tomato, alfredo, pesto and marinara) are the most unique and tastiest around. The Giambanco’s serve a wonderful assortment of pasta seafood that will make your taste buds dance with each fine Italian specialty at Roma Ristorante Italiano. There is such an array of delicious choices for lunch and dinner that one could eat something different just about each day Roma’s is open for an entire year. Roma’s has also been voted #1 Italian Restaurant for almost 10 years by readers of Northern Neck News, also Best Pizza and Best Burger previously.

After 34 years, the family’s dream is becoming a reality with the building of their own restaurant. Roma’s is relocating behind their original home into a new building facing Rts. 360/17. The time has come for all new tables and seating, a modern kitchen, a new banquet room, and a spectacular continuation of a Tappahannock tradition. The new Roma Ristorante Italiano will boast a high tech banquet room that is a first for the Tappahannock area. Included will be a 15′ wide screen projector and a state of the art wifi wireless network with Bose surround sound that will be the perfect compliment for local business meetings, award ceremonies, family reunions and wedding rehearsals/receptions. “And to watch the Cowboys go to and win the Super Bowl,” Johnny says.

Johnny Giambanco and his family invite you to dine in their new restaurant and wish for you to continue to enjoy the same favorite Italian specialties as always. Roma’s motto is, “Non c’e amore pui sincero Di quello Del Cibo,” “There is no love more sincere than the love of food.” The Giambanco’s also graciously send a warm thank you to all of Tappahannock for welcoming them into the community and your family for over three decades of success and friendships and may there be many more to come in Roma Ristorante Italiano’s new home.

If you haven’t been to Roma’s lately, go!  I’ve eaten in some highly rated Italian restaurants in Boston, New York and Chicago and none are any better than I can get right here in my hometown!
– Scottie Brimmer

I love Roma’s pizza and pasta!! We are lucky to have such a nice Italian Restaurant in town!
– Sharon Hardy

This restaurant is excellent quality- stopped by on the way home from vacation and pleasantly surprised. Newly built or renovated building, beautiful interior with nice restrooms. Had the Stromboli- fantastic! Huge meal for a reasonable price, rivaled little Italy restaurants in Baltimore for taste! My wife had the chicken Parmesan- very impressed with that as well. Highly recommended restaurant.
– Jonathan Shinkle

I don’t go to this restaurant very often but when I go in there I am always pleased with the service and the food the people and the owner are very kind to their customers.
– Jake Stykel

Good size menu… The pasta sampler is a great first time choice to have all four of there signature pasta and pick the one you like the most for next time!
– Christopher Hill

Was there for the first time this week. Food was amazing and had a very polite staff. I will be back for sure!
– Michael Husted